The recipe for this traditional Ayurvedic herbal supplement dates back thousands of years and is referenced in the traditional Indian Ayurvedic texts the Charak and Sushrut Samhitas. Triphala is considered a 'tridoshic rasayan', having balancing and rejuvenating effects on the three constitutional elements that govern human life: Vata which regulates the nervous system, Pitta which maintains metabolic processes, and Kapha which supports structural integrity.

Triphala is one of the most popular herbal remedies in Ayurveda which 'cleanse' by promoting bowel movement. A reason is that one of the most common problems among many individuals is constipation and bowel irregularity. This can lead to poorer general digestion and liver function, less vitality and perhaps even less optimism and an overall poorer outlook and quality of life.

Triphala combines both nutritional as well as blood and liver cleansing (detoxifying) actions. It has little function as a local demulcent but is more of a lubricating source of nourishment and also possesses some bitter anthroquinones which help stimulate bile flow and peristalsis. The nutritional aspect is partly in the form of its bioflavonoids, high vitamin C content and the presence of linoleic oil, phospholipids and other important

Nutrients which it makes more of a tonic. Because of its high nutritional content, Ayurvedic doctors generally do not regard Triphala as a mere laxative. Some of the scientific research and practical experience of people using it down through the ages has demonstrated that triphala is an effective blood purifier that stimulates bile secretion as it detoxifies the liver, helps digestion and assimilation, and significantly reduces serum cholesterol and lipid levels throughout body. As a result, it is regarded as a kind of universal panacea and is the most commonly prescribed herbal formula.

Amalaki, Emblica Officinalis, is one of Ayurveda's greatest rejuvenators and a strong natural anti-oxidant, also helps to boost the immune system. Balances Pitta.

Haritaki, Terminalia Chebula, the Tibetan "king of medicine",is a classic heart-brain-longevity tonic,it is often depicted in the extended palm of the Buddha. Balances Vata.

Triphala side effects:
The one time not to use triphala is during pregnancy. It's 'downward flowing' energy is believed to favor miscarriage.

One would stir in two or three grams of the triphala choorna/ triphala choornam/ triphala powder with warm water and consume the entire amount each evening or divided into three doses throughout the day, between meals if possible.

The larger dose is more laxative while the smaller dose tends to be more gradually blood purifying. 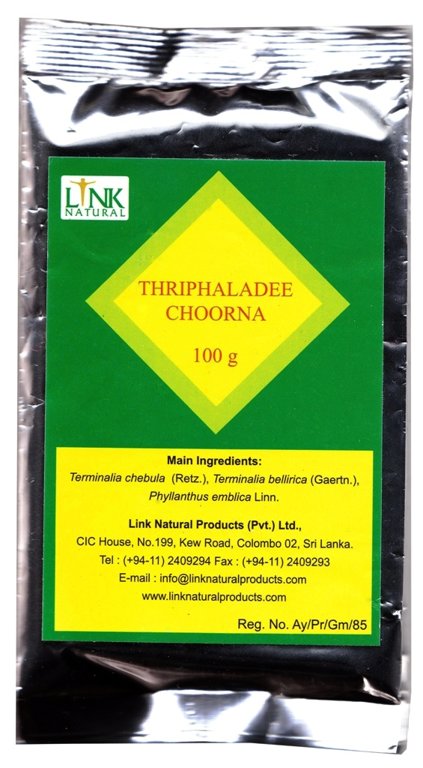